The T1 Complete Fuel Solution for the second-generation Audi R8 and Lamborghini Huracan comes with all the necessary parts required for install, but there are specialty tools which will make installation much easier.  Installation is HIGHLY recommended to be performed by a qualified mechanic. Before any of the required work is started make sure the car has been given adequate time to cool and the battery is disconnected.

If you have purchased the system which includes the in-tank portions of the system, please see attached file for installation instructions. Please note that the T1 version will only utilize a single pump so you will have an empty fuel pump spot opposite the 2” hole you will drill for the E5LM pump. The red anodized manifold which would typically connect the two pump outlets has been plugged where the second pump would mate, but you will still use both connectors and all fittings in the tank hat. 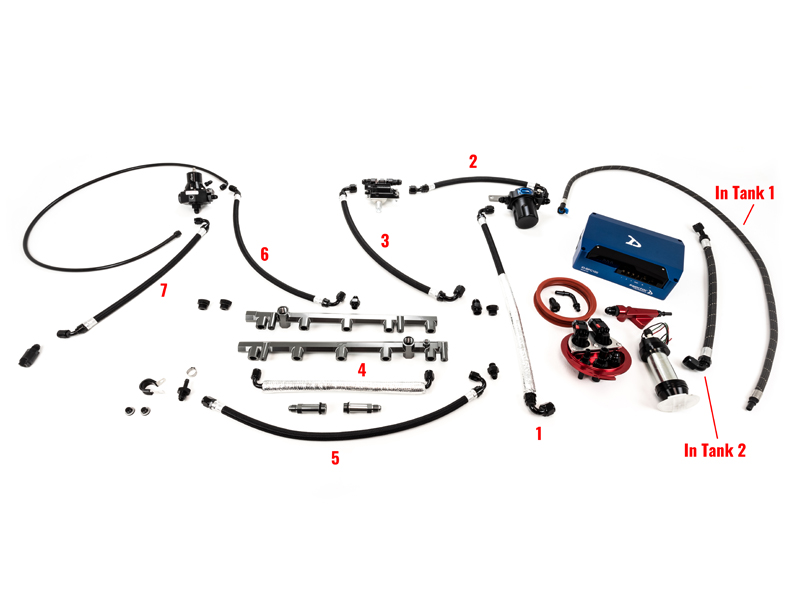 Once the in-tank portion has been completed you can move onto installing the engine bay portion of the system. Our kit picks up directly at the fuel tank hat and the first line in the system will be the feed line from the hat to the Injector Dynamics F750 fuel filter. The F750 will mount on a factory firewall stud and use the factory nut to secure. 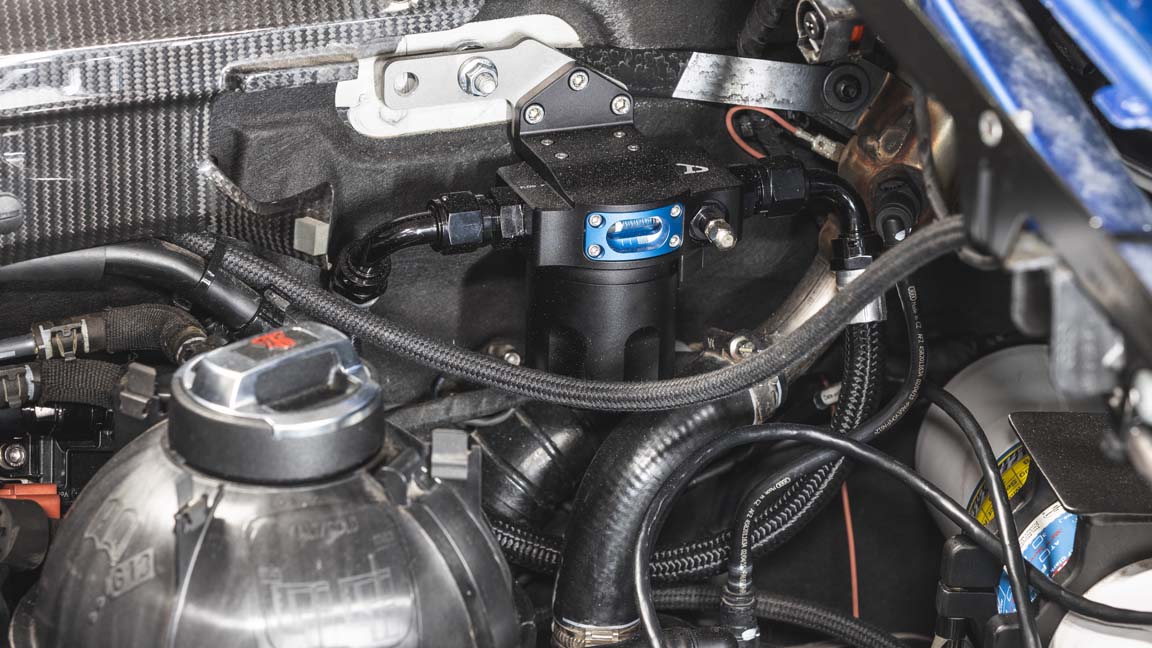 The provided mounting bracket has two holes, one will be used for install on a Huracan and the other on an R8 (R8 application pictured). With the filter mounted, route the line (line 1 in kit picture) through the firewall behind the OEM heat shield, under the bulkhead, and into the cabin area with the heat reflective portion passing through the firewall. Install the 120* hose end on the fuel feed fitting on the fuel tank hat, and the 90* on the left side of the fuel filter.

The next step will be installing the ethanol content sensor assembly on the factory coolant header tank bracket.  The sensor will install inside the two legs of the bracket and sit close to the firewall as pictured below. 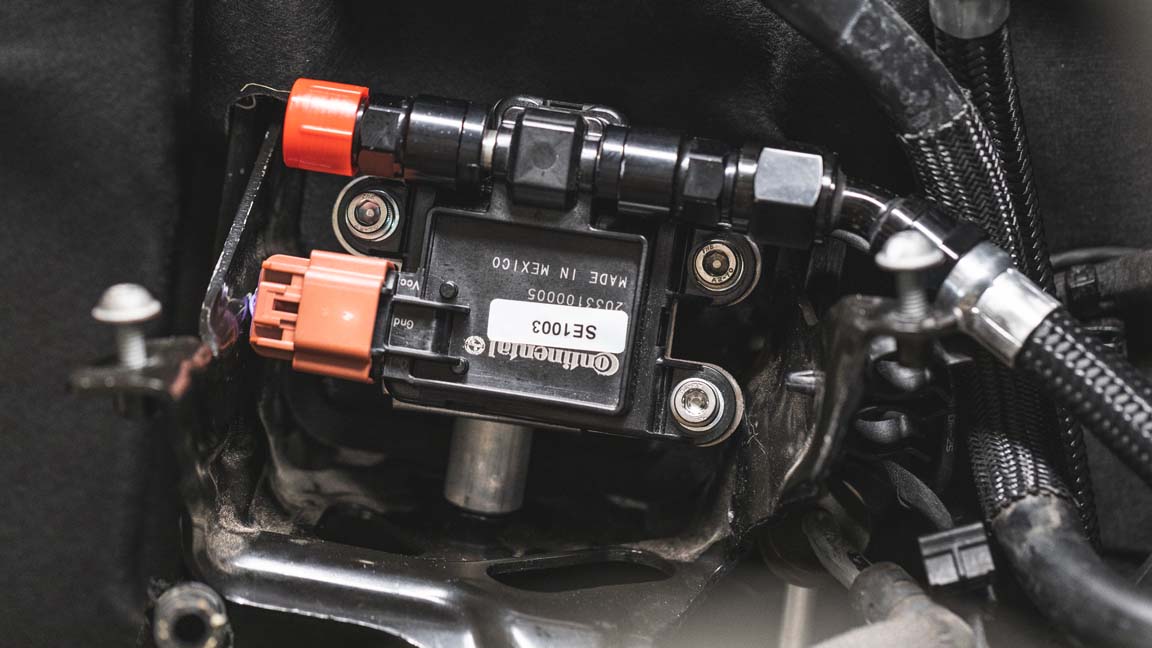 A hole will need to be drilled in the approximate location seen, to allow a 6mm bolt to pass through. Once done install the sensor and bracket with the provided spacer between coolant header bracket and ECA bracket securing with the two M6x12mm bolts and washers. Once the ECA sensor assembly and coolant header tank bracket are back in place the line between the F750 filter and ECA sensor can be installed. This is line 2 in the kit image and the 90* hose end will mount on the right side of the fuel filter while the 30* hose end attaches on the right side of the ECA sensor.

The ECA sensor will connect to the bank 1 (passenger side of car) fuel rail using line 3 and the provided -08 ORB to -08 AN fitting.  Please note there is a front and rear to each fuel rail; -08 ORB on one and -06 ORB on the other.  The -06 ORB side is the side closest to the firewall and the -08 ORB side would be towards the rear of the car for both. On the outside of the bank 1 rail there is a -08 ORB receiver, which is where the fitting for this line will be installed. The line can then be installed and has 90* fittings on each end.

The fourth line will be the crossover line between the two fuel rails. The gunmetal colored -06 ORB to -06 AN long fittings will install on the insides of both rails and be connected by the line, which again has 90* hose ends on both sides.

The fifth line in the system will run between the front (firewall side) of the bank 1 rail and the direct injection pump housing.  Install the provided -06 ORB to -06 AN fitting in the front of the fuel rail and then move on to installing the -06 AN to 5/16” barb fitting. This fitting will fit into the factory low pressure supply line already connected to the high pressure pump. Secure with the provided oetiker clamp in the center valley of the engine. The 120* hose end will be on the rail side and the straight end will end at the -06AN to 5/16 barb fitting.

There have been three total -08 ORB plugs provided as well which will be installed on the two rear ports of the fuel rails (closest to throttle bodies), and on the outside port of the bank 2 rail (driver side).

Two M12x1.5 plugs and crush washers have been provided and need to be installed on both of the high pressure fuel pumps.  These pumps have a fitting that bleeds fuel off of the DI system to feed the factory port injection rails. Remove the OEM lines and fittings for this and use the provided fittings to block these ports. 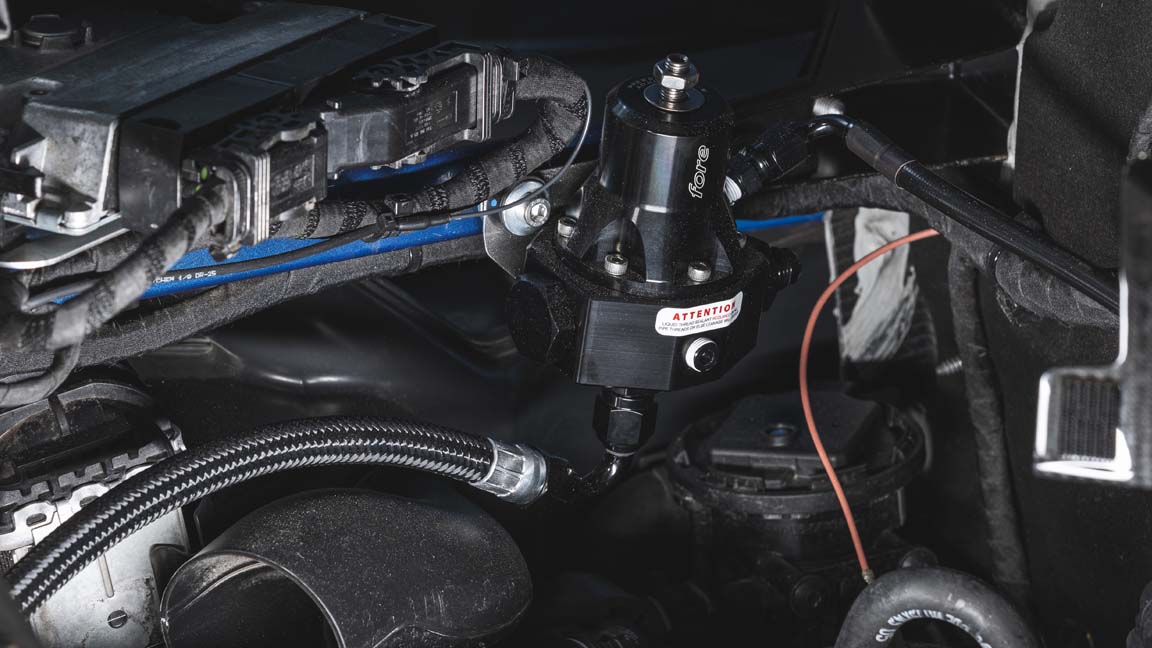 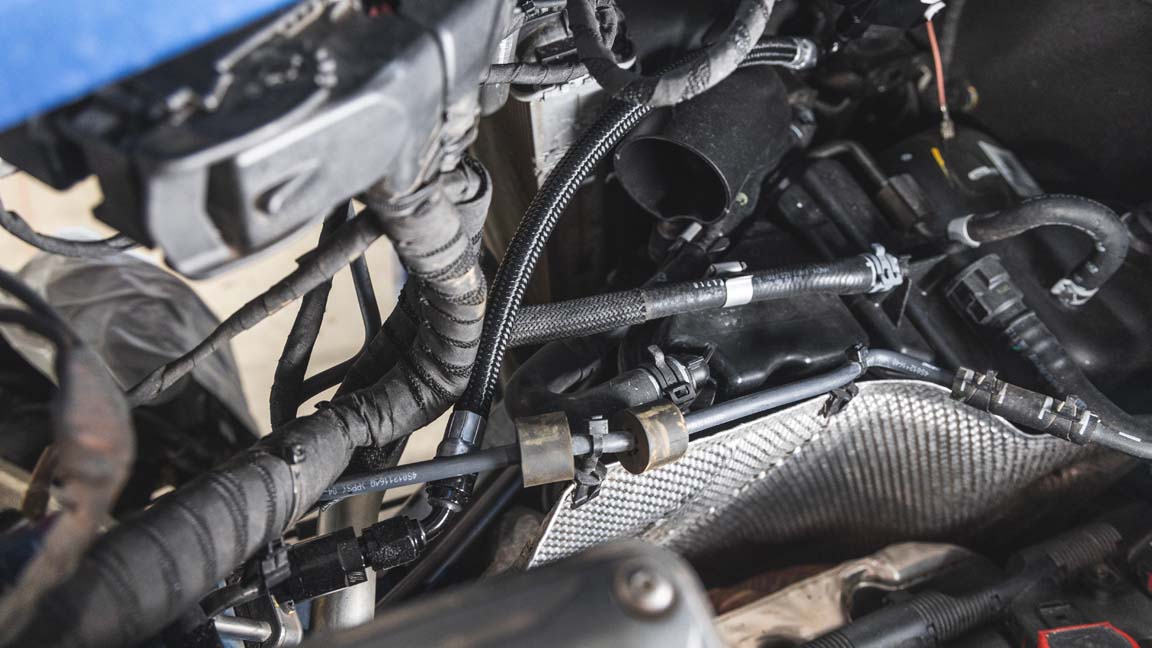 The fuel pressure reference line can be tied into a few places, but we find the easiest hose to tie into is located on the bank 1 plenum. With some of the factory vacuum system components deleted there is an open line with which we provide a fitting and clamp to secure on. This will connect to the provided -04AN black hose.