(7) Bolts and washers for FPR bracket

(13) Redhorse ORB to AN fitting 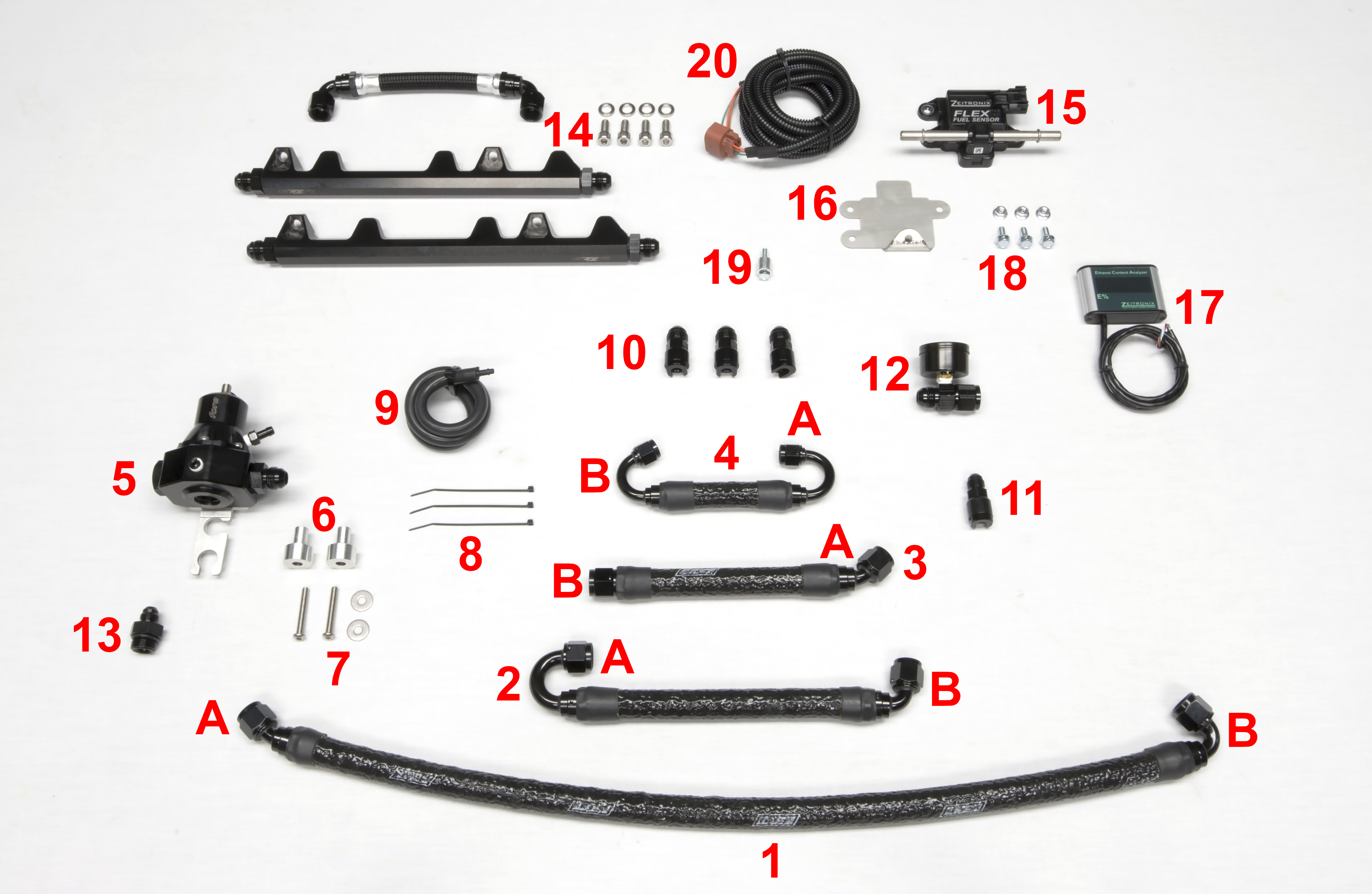 *Note – All AN fittings are assembled dry, no sealant of any kind should be used on the threads or tapered sealing surfaces*

1. The first thing you want to do is relieve the system of pressure.  There are a number of ways to do this, but typically it's easiest to just disconnect a line at the firewall.  There are two fuel lines coming up on the pass side of the firewall, one is bigger than the other.  ON A COOL ENGINE, put a rag over the larger line and disconnect the fitting, allowing the rag to catch the fuel that leaks out.  These fittings disconnect by squeezing the release tabs on both sides at the bottom and pulling up on the line.

2.  With the factory fuel rails, regulator, and fuel lines removed from factory hard lines located on the firewall, the GT1R Fuel Line Kit installs very easily.  When installing the fuel rails (Part 14), the crossover tube should connect at the fronts of the rails, and the bolts should torque to 16ft.lbs. You will reuse both factory rubber grommets from the firewall mounted OEM fuel line bracket. Install these grommets on the GT1R fuel pressure regulator/bracket assembly (Part 5) and then insert both of the machined spacers (Part 6) with the large faces on the rear of the bracket.  Mount assembly in stock fuel line bracket location using supplied bolts and washers (Part 7). Now thread the Redhorse ORB to AN fitting (Part 13) into the bottom of the Fore fuel pressure regulator and tighten. With the regulator assembly and V2 GT1R Fuel Rails (Part 14) installed, you may now install the line kit. 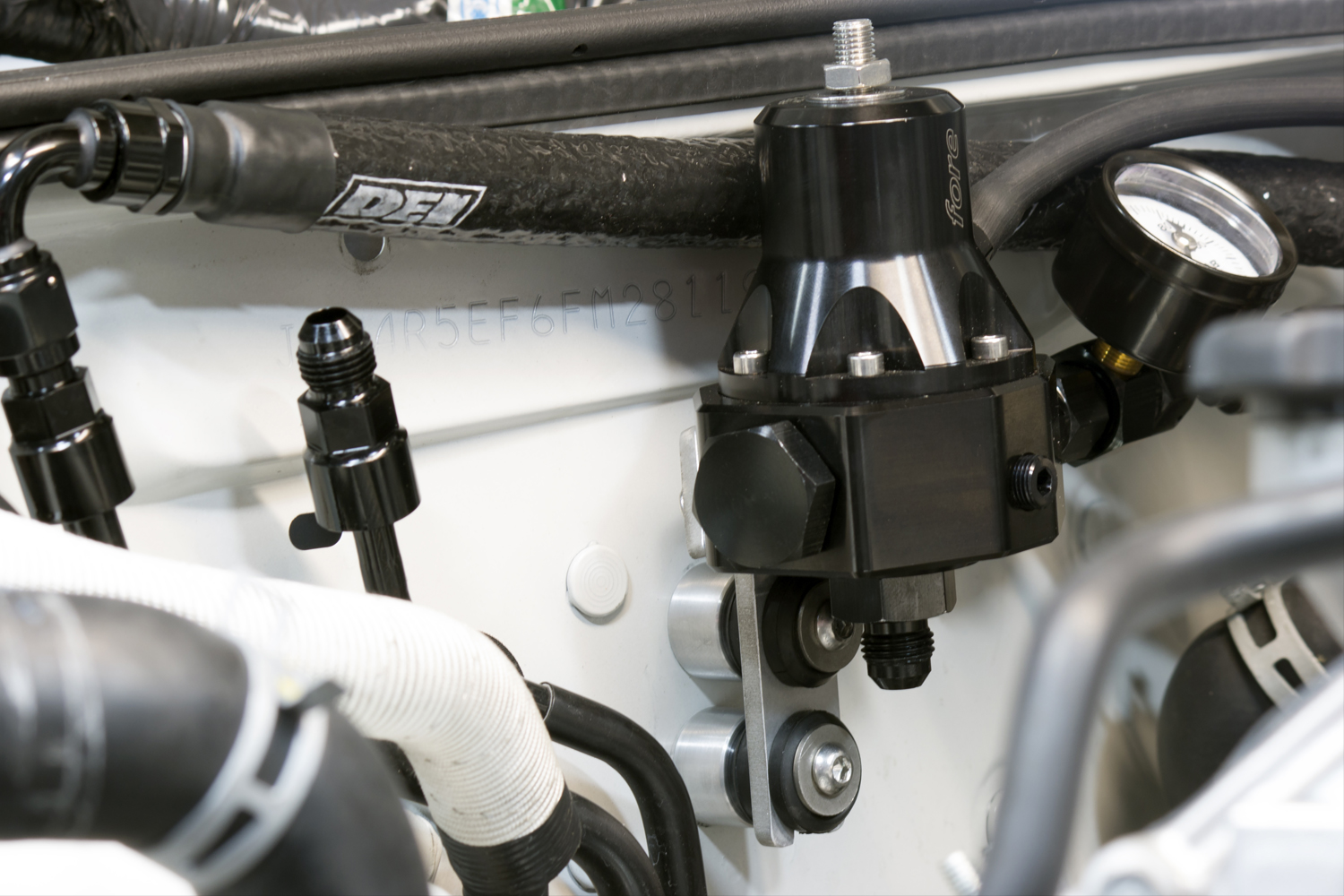 3.  The 25 ¼” long line (Part 1) installs on the rear of the driver side (bank 2) fuel rail and between the factory fuel feed line, which is the larger of the two in size.  One of the three Redhorse 881-08-06-2 (Part 10) fittings installs directly on the factory feed line first, put a small amount of oil on the hard line before installing, to lubricate the o-ring inside the fitting.  Side A of the line installs on the back of the fuel rail, and Side B installs on the now installed Redhorse fitting.

5. The 6” long line (Part 3) installs between the passenger side of the ECA sensor (Part 15) and the right side of the fuel pressure regulator (Part 5). The Redhorse fitting with fuel pressure gauge installed (Part 12) will install on the right port of the regulator before the line is installed. Side A of the fuel line attaches to the now installed gauge fitting, and Side B attaches to the passenger side of ECA sensor.

6.  The 3 ¼” long line (Part 4) simply installs between the bottom of the fuel pressure regulator and the factory fuel return line on the firewall, which is the smaller of the two stock lines. The Redhorse 881-06-05-2 fitting (Part 11) installs on the factory return line first, again, lube the hard line before installing the fitting.  Side A of the fuel line attaches to the now installed Redhorse fitting and Side B attaches to the bottom of the regulator.

Mounting and wiring of the display (Part 20) is left to the end user’s discretion. Zeitronix provided instructions cover wiring (Part 20) of the sensor and display.


For use with a COBB Accessport, COBB has provided a very detailed overview concerning the wiring diagram and tuning. Please refer to the following post: