improper filtration. I don't think anyone intends to build a fuel system that's not right, it's just not

understood in full by many. We want to change that!

Fuel filters are rated in microns. A micron is a unit of measurement, equivalent to .000039 inches. (39

Millionths of an inch.) The symbol for micron is µ, though you don't see it too often in fuel filter ads.

To put  this into perspective, a human hair is about 100 microns in diameter. Anything less than about 30-40 microns

can no longer be seen with the naked eye. A '10 micron' filter will block contaminants larger than 10

microns, and let those smaller than 10 microns pass.

"Resistance to Fuel Contamination - Quality of the Medium. Dirt particles and contaminants in fuel

represent a potential danger to the fuel injectors. They are to be avoided in order to preserve the correct

function of the injectors. The dirt content in the fuel system must therefore be minimized via a suitable

19438; dirt particles >35µ are not permissible. The basket filter in the injector serves only to catch

residual particles. Nonconformance of the recommended filter quality can cause damage to and failure of

So Bosch recommends a 5µ filter and says anything over 35µ can cause injector damage. Think about that,

things you can't see with your naked eye are big enough to cause damage to a fuel injector. Not only is there

the concern of the contamination clogging the internal filter enough to cause a reduction in flow, but the

contamination that makes its way into the injector scores the bore, affecting critical tolerances.

Seems simple enough, so why are so many people misinformed? I hear pretty regularly that people are told

by fuel filter manufacturers that their 10µ filters are not ethanol compatible, so if they're going to run

better for use with ethanol, the manufacturer has just made a recommendation that will likely cause

injector problems down the road. People don't like to hear this after the damage, trust me!

The filter before your pump serves mainly to protect the fuel pump. Depending on the pump, usually a 30-

100µ filter is used here. The filter after the pump serves to protect the injectors and as noted, needs to be

much finer. Being that the filter is protecting the injectors, anything after the filer is technically not

filtered. This isn't a big concern in OEM fuel systems which mostly have hard lines, but when you're plumbing

your race car with rubber hose, do yourself a favor and put the fuel filter right up by the rail inlet. This will

leave the least amount of unfiltered fuel system and protect your injectors.

A 12µ filter is generally sufficient and they are readily available, with paper elements. If you're running

ethanol I suggest digging a little and finding a 12µ or similar ethanol compatible element.  The 6 and 12 micron

microglass, ethanol compatible fuel filters, have done well in our testing and are recommended.

Also, stay away from small fuel filters, especially those tiny ones with a single round screen disk. Those

shouldn't even be allowed on the market. The least bit of contamination and they're clogged enough to be a

major restriction in the system. The more surface area your filter has, the longer the service interval will

be. A pleated filter cut apart and stretched out would probably surprise you with how much surface area of

Given the importance of filtration, Injector Dynamics has some new fuel filters in the works. More info will

be released as it's available, but rest assured, like all other ID products, they will be among the best

*Update Jan 2016*  - In the development of our coming fuel filters, we tested a lot of the filters on the market.

We found the 10 micron stainless elements on the market to be far from 10 micron, catching almost nothing all

the way up to 25 micron, as seen in the test below.

The 10 micron stainless elements that we have tested are not suitable for Injector Dynamics fuel injectors. 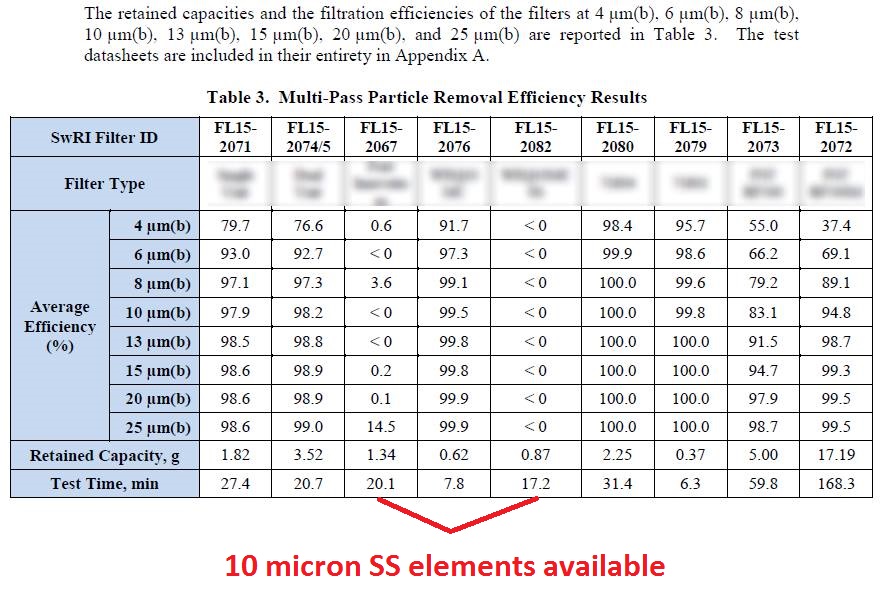